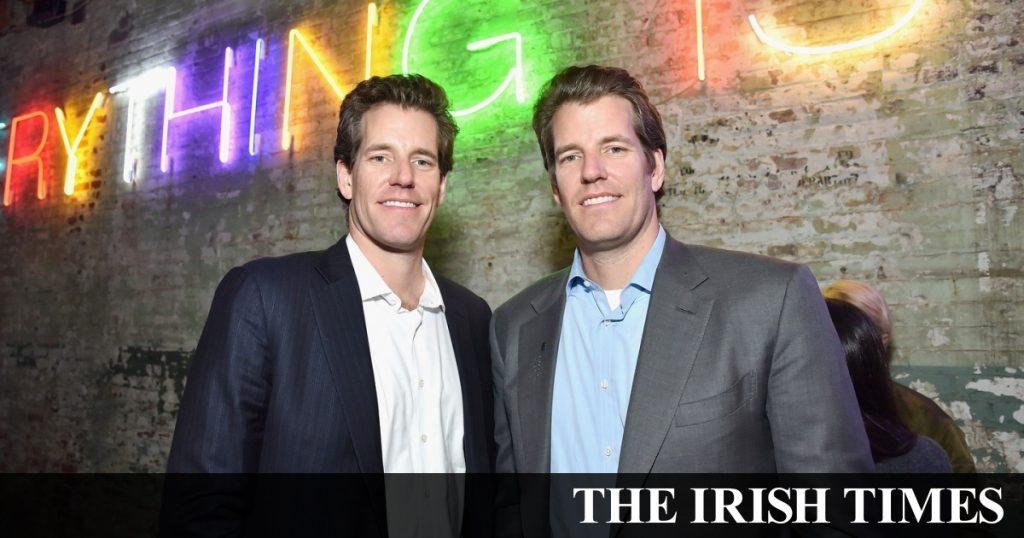 Ben Mezrich is the author of Accidental Billionaires: The Founding of Facebook, the book that David Fincher adapted as the film The Social Network. Both book and film presented in not especially sympathetic light the Winklevoss twins – the chiselled, 6ft 5 professional rowers and ‘Men of Harvard’ who sued Mark Zuckerberg, claiming he had stolen the idea for Facebook from them when they were undergraduates.

Facebook ultimately paid them $65 million (€57.8 million) – a fraction of what the twins felt they deserved.

The investigation into their claim threw up such evergreen insights into the soul of Zuckerberg, which has since receded behind a facade of corporate blandness, as the private messages in which he got ready to ‘f**k’ the Winklevoss twins ‘in the ear’; noted that ‘You can be unethical and still be legal – that’s how I live my life’; and slapped the third of the Earth’s population who would later give him their data in the face by observing that ‘People just submitted it. I don’t know why. They ‘trust’ me. Dumb f**ks.’

With his hoodie and trainers and nerdy awkwardness, the Zuckerberg of The Social Network embodied the upstart spirit of new tech, while ‘the Winklevii’ were the suited Establishment.

As Mezrich acknowledges in his new book, Bitcoin Billionaires, the image needs revising. Today there is nothing more Establishment than Facebook – a stupefyingly vast business that harvests the data of more than 2.3 billion users. Few can still take seriously the idea that Facebook has any motive nobler than the bottom line.

The new boss is just like the old boss, and he’s willing to poison social discourse, exacerbate human unhappiness, and wreck democratic institutions in pursuit of profit. Just don’t say you weren’t warned, dumbf**k. After burning off their rage at Zuckerberg by competing in the 2008 Beijing Olympics, Cameron and Tyler Winklevoss improbably found themselves in the eye of another tech revolution, and this is the story that Mezrich sets out to tell here.

An author who keeps using the word ‘Billionaires’ in his book titles likely keeps one eye firmly on the bottom line himself, and Bitcoin Billionaires feels like a draft of the screenplay for the film that Mezrich wills into being on every page (the rights have already been sold). Whirling us through an array of glamorous locations – Ibiza, Cyprus, Panama – while hitching his story of technological revolution to a racy human narrative, he shamelessly imagines screen-friendly dialogue, much of which expounds on technical details. Info-dump banter runs like this:

‘Exactly,’ Voorhees responded, ‘and Bitcoin has all of those properties too.’

‘But Bitcoin is better at being gold than gold,’ Charlie interrupted.

‘Correct. Bitcoin is not just scarce like gold, but its supply is also fixed,’ Voorhees said.

The story begins with Cameron and Tyler picking themselves up after having their ears bothered by Zuckerberg. They set up an investment firm, only to find themselves shunned by entrepreneurs wary of offending the omnipotent Zuckerberg by taking money from the enemy.

Partying with celebs on Ibiza in 2012, they are approached by an evangelist of the burgeoning cryptocurrency movement, who urges them to invest. Before long the twins are pouring money – an eventual $11 million dollars – into buying up Bitcoin, and investing in a prominent startup named BitInstant, whose chief executive is Charlie Shrem, a brilliant, weed-loving Jewish kid who lives in his mother’s basement in Brooklyn.

There’s a certain amount of drama as the wealth accumulates, young Charlie is led into hedonistic temptation, and the legality of cryptocurrency falls under increasing scrutiny. The real function of a book like this, though, is to serve as a painless primer on Bitcoin, blockchain, cryptocurrency, and the metaphysics of money. Bitcoin is ‘Gold 2.0’, a digital, decentralised form of money that – here’s the revolutionary bit – requires no authority: no banks, no governments, no middlemen. As such, it appeals to both the libertarian right and the anarchist left.

Bitcoin’s inventor is a mysterious, likely pseudonymous figure, ‘Satoshi Nakamoto’, who wrote the novel-length texts outlining how the ingenious system works, minted the first Bitcoin (‘the Genesis Block’), then vanished before anybody learned his real identity.

Whereas the price of commodities such as gold decreases as new deposits are discovered, Bitcoin is limited: there will never be more than 21 million Bitcoins in existence. Every Bitcoin transaction ever made is recorded on the blockchain, the ‘global ledger’ drawn up by digital ‘miners’ who divert their processing power into solving the mathematical equations generated by Bitcoin transactions in exchange for payments in the currency.

In its first years, Bitcoin met with resistance not only by the financial and governmental institutions which stand to lose most if it succeeds, but by the Silicon Valley establishment. Various criticisms were levelled: Bitcoin was a Ponzi scheme (inaccurate); Bitcoin made business easier for drug dealers, gun runners and other criminals (pretty accurate, especially before Silk Road went down); Bitcoin was a volatile currency (accurate, but mainly because it’s still in its early days).

Bitcoin Billionaires charts the ideological struggle within the Bitcoin community between those like the Winklevoss twins, who believe that cryptocurrency should be regulated and must dissociate itself from criminality, the better to revolutionise the world monetary system, and the libertarian cypherpunks who see Bitcoin as a weapon in the struggle against all systems of authority.

As Mezrich concludes, cryptocurrency is not going away. The revolution is real: the question is whether crypto will take its place alongside existing financial institutions, or overthrow them entirely.

Our current period of insecurity and suspicion may play out to Bitcoin’s advantage. When the nation of Cyprus was at risk of going bankrupt in 2012, it availed of an EU bailout offered on the condition that the government plunder the savings of the Cypriot population from the banks: very bad for the Cypriots, but good for the Bitcoin community, as this cold-water shock warned the world that the safety of the banking system is an illusion that can at any moment melt into air.

Rob Doyle’s most recent book is This Is the Ritual, and he is the editor of the anthology The Other Irish Tradition published by Dalkey Archive.